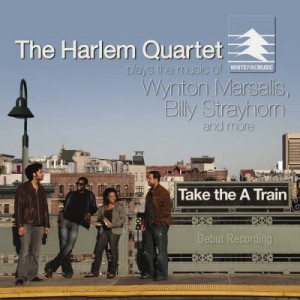 The Harlem Quartet’s debut recording, Take the ‘A’ Train, was released on September 25th at Carnegie Hall in New York. The recording features the works of Wyton Marsalis, Billy Strayhorn, Joaquín Turina, and Guido Lópes-Gavilán. The Harlem Quartet, comprised of First Place Laureates of the Sphinx Competition, seeks to advance diversity in classical music while engaging young and new audiences through the discovery and presentation of varied repertoire, highlighting works by minority composers. The project was created through the partnership of White Pine Music with the Sphinx Organization.